Beaufort County waters boast some of the best salt water fishing along the East Coast. Redfish and Spotted Sea Trout are available year round, with some of the hottest action found during the fall months.

April and May welcomes the arrival of Cobia in the rivers and sounds. Fishing live bait throughout the water column produces powerful strikes.

In June we’ll begin to catch Spanish Mackerel and Bluefish at the rips and off the beaches. During the summer months there will be a large variety of sharks to test even the most seasoned angler. Other species active during the summer are Flounder, Whiting and Tarpon.

As fall approaches we’ll come upon some of the hottest action for Redfish and Trout on live bait under the popping cork. We catch and release Red Drum in the sound taken on live bait, which is an experience you’ll not soon forget. In the water, Cobia look very much like sharks. The usual color is brown or dark gray above, whitish on the underside, with a dark stripe running from gills to base of tail. The striped appearance is more vivid in juveniles. Several rather sharp finlets on the dorsal surface extend from behind the head to the dorsal fin.

Blue fish color is steel blue or dark green above, shading to silvery white below. A dark spot usually shows at base of pectoral fin. Blue fish have large mouths with prominent teeth and a forked tail. Averages 1-3 pounds in most coastal waters of Florida, with catches to 6 or 7 pounds always possible, especially around major inlets, passes and jetties on both coasts. Green or steel above, silver on sides and belly. Deep, thick body; forked tail. Long trailer at end of dorsal fin. From 12 inches or less to about 75 pounds, on average, although big fish of 100 to 150 pounds are numerous in many areas. 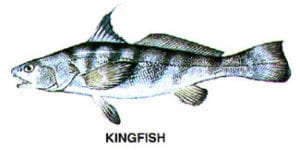 Also known as a Southern Whiting, the southern kingfish has a large head with one barbel at tip of lower jaw as well as a flattened belly. With an overall silvery color and tannish on top the kingfish also features indistinct dark blotches on side.

The Red Drum, also known as the Redfish or Channel Bass, has a reddish overall coloration and one or more dark spots at the base of the tail. It feeds at the bottom on crustaceans and mollusks. It also takes small fish, especially mullet. The usual adult weight is under 40 pounds but can reach into the 90 pound range.

Streamlined shape; large mouth with prominent canine teeth; color gray or silvery with many prominent black spots on sides. Background may be quite dark, or gold, when fish are in back bays or streams.

Dark above with silvery sides. Many spots, which are both yellow and brown. The body is proportionately deeper than with juvenile King Mackerel, and the yellow spots appear rounder and brighter, but if in doubt, the only true identifier is the lateral line, which tapers rather gently from front to back with no severe dip.

Brown or olive background, liberally marked with both dark blotches and white spots; however, the prominent eye-like spots (ocelli) of the Gulf Flounder are missing. It averages 2-4 pounds, but fish running 8-12 pounds are caught each year.

A slender, silvery fish with deeply forked tail and large, scoop-shaped lower jaw. Said to be mistaken at times for the Bonefish, but the error is difficult to conceive of, given the big mouth and jumping ability of the Ladyfish.

Gift certificates for fishing charters offered year round, in a limited quantity. Gift wrapped for any occasion and shipped priority. A great gift for the ones you love!
Learn more... 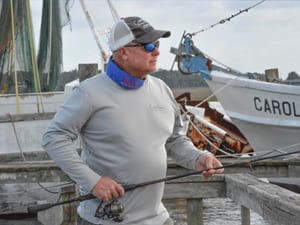 One-on-one instruction for both newcomers and locals who fish these waters. We spend a half day (longer if you prefer) exploring the techniques and timing of fishing this area. Have your notepad ready! One angler/$475/Half day